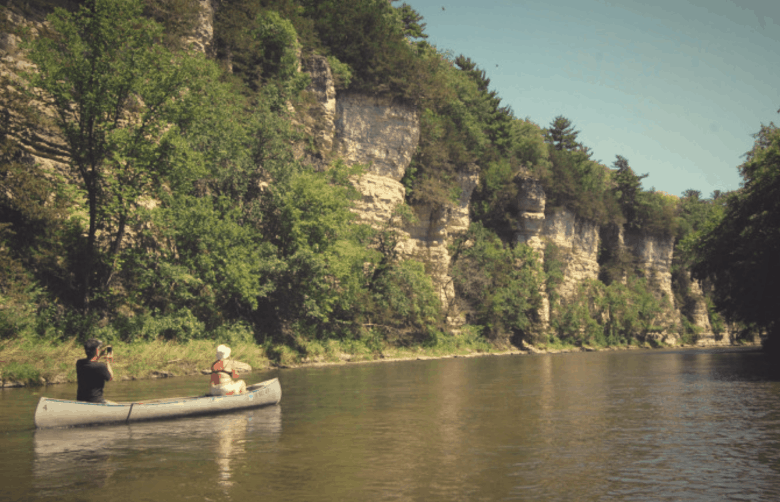 So many paddlers will write off Iowa as corn country with little to offer in the way of scenery or variety, but they would be making a foolhardy generalization. Rather than amber waves of grain you’ll be treated to challenging whitewater sections, glassy lakes, and big rivers cutting their way through vast forests.

The state currently has over 900 miles of designated water trails – waterways with designated put-in points and clear signage noting distances between these access points. The routes have been carefully documented and the Iowa Department of Natural Resources even maintains a detailed interactive paddling map that you can use to plan a trip on their amazing water trails.

If you want to get out on the water but don’t have much experience in a boat, this is one of the best places to get some strokes in. The park is just a few miles from downtown Iowa City and the 95 acres of calm waters at Sand Lake are ideal when you’re just getting into the sport or feel like a lazy day.

It should be noted that the park could get somewhat crowded on the weekends when students from the University of Iowa come out for a day away from their studies. However, bring along your fishing gear and you might have the chance to catch some brook trout or walleye.

This water trail runs for 35 miles from Webster City to where the eponymous river joins the Des Moines River near Boones Fork Wildlife Management Area. It’s a pleasant paddle through dense woods that are populated with a variety of wildlife including river otters, hawks, and eagles. The scenery is pretty unbeatable too with sharp bluffs penning the river into a narrow canyon. The banks of the river are also loaded with history as the waterway was home to a number of sawmills during the nineteenth century.

The most popular section of the water trail runs from Briggs Woods access point to Bell’s Mill Park for a total of 16 miles. There are two smaller rapids located just outside Briggs Wood and about five miles downriver from there that should be avoided if you don’t have much experience with bracing or rolls.

Where to Rent a Kayak – Rock n’ Row Adventures in Eldora

This waterway was named one of National Geographic’s 100 Greatest Adventures and it’s not hard to see why as the 156-mile long river winds it’s way through nearly 300-foot-tall limestone cliffs. One of the best sections involves putting in at the Kendalville Park Access and paddling down to Bluffton Fir Stand Access, 18 miles away. There are three access points in between at Plymouth Rock, Chimney Rock, and Bluffton Bluff if you’d prefer a shorter route.

This trip doesn’t require any prior experience, as the river is quite calm except during flood stage. There are no rapids or obstacles that need to be avoided, you can just chill and use your paddle intermittently. Due to its ease and beauty though, the Upper Iowa River might be the most popular place in the state to go kayaking. If you’re trying to avoid the crowds, this one might not be for you.

This Maquoketa River Water Trail is 50 miles long and starts as two separate forks of the Maquoketa River before they meet in its namesake town and flow another 30 miles before reaching the Mississippi River.

One of the best sections of the trail is the 18 miles between Backbone State Park and the roiling rapids of Manchester Whitewater Park. The trails starts on a high note as the put-in point is surrounded by several beautiful stone bridges and shelters that were built by America’s Civilian Conservation Corps back in the 1930s. From there the river meanders through old growth forest, past beautiful limestone cliffs, while encountering a couple patches of rough waters. It’s nothing that a beginner can’t handle, but enough to be a little exciting.

There are two access points between Backbone State Park and Manchester at the town of Dundee and the Lindsey Bridge. The final segment in the whitewater park will have you negotiating six 18-inch rapids in less than a quarter of a mile. They aren’t particularly challenging for experienced paddlers, but a beginner might get their adrenaline pumping while still feeling relatively safe.

Where to Rent a Kayak – Fever River Outfitters in Galena, IL

This was Iowa’s first whitewater park when it opened back in 2011, and although a couple more have popped up, there’s nothing like surfing the original in downtown Charles City. The park consists of three features that should appeal to a variety of different paddlers. Dam Drop (known as Double D to the locals) is designed for stand up paddleboard surfing. There’s a lot of space for moving around in the trough of this wave, so if you’re using a shorter boat, feel free to get a little crazy and try out some spins. The next feature is called Doc’s Drop and it is a bit taller than the first rapid. They had playboats in mind with this one, so get focused on your vertical moves here. Last, but not least, is the Exit Exam, which is just an all-around great feature to play around in, particularly if you’re a beginner unsure of the finer points of surfing with a kayak.

One of the best things about whitewater parks like this is you can try out new tricks without the danger that comes with a natural river rapid. Expansive eddies near the rapids allow for safe exits and if you decide that whitewater paddling isn’t your thing, it’s easy to swap out your kayak rental for an inner tube to play away the day.

We have recently updated our articles about kayaking in Illinois and Anchorage, Alaska – make sure to take a look!