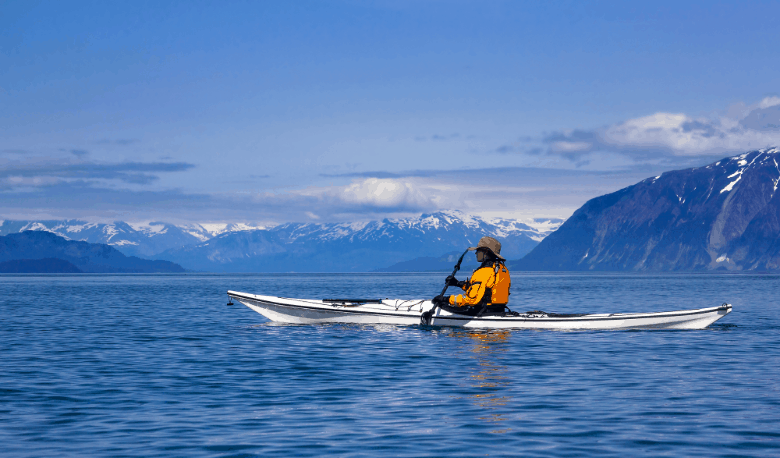 Alaska, America’s last great frontier – a state defined by its wilderness areas and the childhood fantasy of so many outdoor-loving residents in the Lower 48. The waterways of Alaska have a way of making you feel like they’re somehow wilder, even when they’re not far from civilization.

Being Alaska’s most populous city, Anchorage is a likely starting point for any adventure that you might embark on in the Last Frontier. It’s one of the few places in Alaska that can be reached via affordable air travel and it’s the transportation hub for the entire state. All planes, trains, and automobiles leave from Anchorage. It’s also where you’ll find some of the best gear rental shops and tour guides. Due to the remoteness of many of the best kayaking destinations in Anchorage, it’s a good idea to travel with a guide and have a high quality kayak trailer or a kayak cart if you are going to paddle with your own equipment. While it is possible to organize trips independently, you’ll find that there are a lot more options if you pay a little bit extra to go with someone that knows what they’re doing.

If you can’t afford to kayak far from Anchorage, or simply don’t have the time, a paddle around Cook Inlet might be the perfect way to spend an Alaska vacation. The inlet stretches 150 miles from the Gulf of Alaska back to Anchorage, but the area we’re focusing on lies just outside the city’s downtown area and allows for some amazing views of its skyline.

One of the best places to launch your kayak is at Kinkaid Park, just south of the Ted Stevens International Airport. There’s no boat ramp, and the parking lot isn’t particularly close to the shore, but you can’t beat the location. Fire Island is only three miles from Kinkaid Point and is actually accessible by foot at low tide (though this is highly discouraged as the tide could easily trap someone on the mud flats). The island is owned by various departments of the federal government and is only open to visitors with prior permission, so it’s best to stay in your boat and observe from a distance.

Another option is to make your way up towards the mouth of the Knik River to the north of the city. The waters here are considerably calmer, thanks to the moderating influence of Fire Island and the narrowing of the inlet to the west of Anchorage.

Where to Rent a Kayak: Alaska Outdoor Gear Rental in Anchorage

If you’ve ever dreamed of paddling amongst the glaciers, Prince William Sound is the place to be. Fortunately for those just getting into the sport, hardly a wave can be found on the sound’s glassy waters.

Very few kayakers will do this trip alone or with their own equipment thanks to the long distance involved in reaching the sound’s most beautiful ice fields. Instead, you’ll probably need to book a tour with a guide and then load your kayak onto a boat and be taken to points further out in the sound.

One of the most important things to remember when paddling Prince William Sound is to not get too close to the glaciers. As spectacular as it is to see one of them calving, nothing could be more dangerous to a kayaker than thousands of pounds of ice coming down on their head, not to mention the massive waves that radiate out from the event.

Where to Rent a Kayak: Prince William Sound Kayak Center in Whittier

In the shadow of America’s tallest peak lies some truly amazing kayaking opportunities, particularly if you’re into whitewater. The 14-mile stretch of the Nenana River, just outside the park’s southern border, is a popular trip for many of the tour companies operating in Talkeetna. This section is certainly not for beginners, as the river runs fast throughout the season and a solid bracing technique will be needed to avoid the more dangerous obstacles.

The scenery on the Nenana River is fantastic though, with tons of wildlife roaming both shores including moose and grizzly bears. A good portion of the route also runs parallel to the Alaska Railway, which will undoubtedly be packed with shutter-happy tourists on their way to the park. Make sure you’re camera ready and don’t do a massive wipeout while everyone’s watching.

The river alternates between relatively peaceful sections filled with lazy eddies to fast currents that will have you moving along so quickly that you’ll have trouble taking in all the beautiful surroundings. One thing to watch out for is the Class III rapid you’ll encounter several miles into the trip. It’s a bit harrowing if you’re not expecting it; so don’t get lulled into complacency with some of the quieter sections above it. After the rapid it’s pretty smooth sailing for the last couple of miles though.

Where to Rent a Kayak: Denali River Guides in Talkeetna

While Denali gets all the attention and tourists, ask any Anchorage local where to go and they’ll point you to Lake Clark National Park. Lake Clark sees far fewer tourists than would be expected for a park just one hundred miles from Anchorage, however, the only way to reach it is by bush plane thanks to it being disconnected from the Alaska highway system. As such, kayaking here comes with some additional complications: if you want to use your own gear, it will have to be inflatable to fit inside one of the small air taxis. However, there are also boat rentals available within the park.

Given the high cost of taking an air taxi to Lake Clark, you’ll want to fit as much paddling in as is possible. Most visitors will set themselves up for a weeklong adventure camping, paddling, and hiking in the park. Circumnavigating Lake Clark involves nearly 100 miles of paddling, particularly if you want to explore its wildlife-filled coves. The logical starting point is at Point Alsworth, as this is where the park’s visitor center and stores are located. Unlike many national parks, no permits are necessary for camping near the shores of the lake, so you can really start wherever you like and you probably won’t run into another soul.

Where to Rent a Kayak: Tulchina Adventures in Port Alsworth

Hope you enjoyed reading through our Anchorage kayaking guide! Please take a look at our other kayak destination guides for Iowa and Illinois to decide about your next trip!